The past few months have seen me delving into the world of flash. I bought a flash unit a number of years a go but never really got round to using it properly. As the days are getting warmer and the sun is getting stronger I thought it would be a good idea to learn how to use fill-in flash properly. I’ve bought a couple of books that have taught me a lot about how to use flash subtly so that it is almost impossible to tell one was fired! My most recent purchase has been the Opteka FS-80 Flash System that is primarily designed to be used outdoors, particularly when there are no suitable surfaces to bounce a flash from. It’s quite a strange looking beast but as my examples will hopefully show below, it does actually work. The unit is supplied with 3 inserts, white, gold and silver, so that you can tint the light being reflected. The technical blurb states that without the inserts 80% of the light bounces off an available surface, whilst 20% will be directed towards your subject. Clearly with the insert the amount of light being bounced is much higher. This is the main reason that when I found myself outside, in a very sunny garden at lunchtime watching the kids play, I thought it was the perfect time to see what this kit could do. Now, I realize that the images I have posted are nothing special, but they were the best out of the bunch that I could use to demonstrate how useful this piece of kit will be when faced wit shooting in full sun or high contrast scenes that do not have a suitable surface to bounce a regular flash unit from.

The results are subtle but really do help bring out dark areas, particularly when the subject is side on to the light source (comparison 1 & 2). The 3rd image really highlights the usefulness of the reflector given that where the 2 small children were playing was completely cast in shadow, whereas the rest of the garden was in full sun. Taking an image without flash would have meant that a sacrifice for either the garden or the children would have had to have been made regarding which would have been correctly exposed. Alternatively, a flash unit pointed directly would have likely resulted in a very unnatural illumination of the shadow area, as it is, in my opinion using this reflector has resulted in a shot with both areas more or less equally balanced. The 4th comparison shows my daughter playing in an area that was completely covered by shadow. Taking a regular shot with no flash would have resulted in the background being completely over-exposed due to the difference in light between the two areas. Using the reflector has allowed me to sufficiently expose the foreground whilst keeping the background correctly exposed.

Clearly it is going to take time for me to fully adapt to using this system but given my brief time with it so far, I am impressed and looking forward to using much more. Particularly at my sister-in-laws wedding (Miss Cakes) wedding in May. 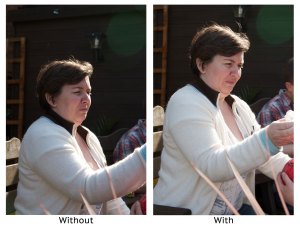 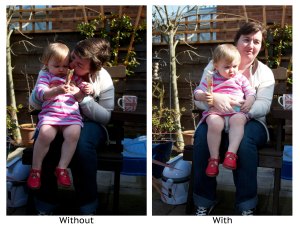 A Cloud of tags